Izmir is one of the biggest cities of Turkey and it is 1 hour flight away frm Istanbul. It is one of teh celebrated cities of Turkey with its international fairs, natural beauty and the proximity to the world famous cultural heritages such as Ephesus, Pergamum, and Sardes. It is also a port city like Kusadasi and there are many cruises using Izmir as a port of call during thier mediterreanean itinerary.

Dating back to the 11th century B.C., it has been painstakingly excavated and restored and is one of the world’s most fascinating sites of antiquity. Ephesus flourished as a prominent city and seaport between 600 B.C. and 500 A.D.  You will begin our private walking tour along Royal Road also known as the Arcadian Way, a 4th century white marble chariot thoroughfare whose most striking sight is the two-story Library of Celsus.

Uniquely beautiful, with its restored facade now the famed symbol of Ephesus, the Library once housed 12,000 scrolls of papyrus manuscripts making it the 2nd largest in the ancient world after the library in Alexandria, Egypt. Your walk along the Royal Road will also take you past the remains of some of the ancient city’s major civic buildings and temples as you move toward the Ephesus Theater from which St. Paul once preached to the Ephesians.  The theater, seating 25,000 has exceptional acoustics and is still in use today for concerts and theatrical performances. 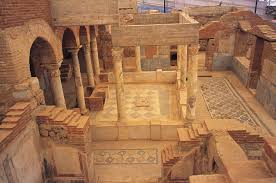 It is the ongoing excavations of the Greco Roman PALACES the ''ELITE YAMAC HOMES OF ANTIQUITY'' (Terrace Houses) with their magnificent mosaics and frescoes being restored by archeologists as you visit the site. There are six residential units on three terraces at the lower end of the slope of the Bulbul Mountain. The oldest building dates back into the 1C BC and continued in use as residence until the 7C AD.

Ephesus Terrace Houses are covered with protective roofing which resembles Roman houses. The mosaics on the floor and the frescos have been consolidated and two houses have been opened to the public as a museum.

They had interior courtyards (peristyle) in the center, with the ceiling open. They were mostly two-storied, upper stores have collapsed during time. On the ground floor there were living and dining rooms opening to the hall, and upstairs there were bedrooms and guest rooms.

The heating system of the terrace houses were the same as that in baths. Clay pipes beneath the floors and behind the walls carried hot air through the houses. The houses also had cold and hot water. The rooms had no window, only illuminated with light coming from the open hall, so that most of the rooms were dim. The excavations of the terrace houses started in 1960. The restoration of the two of the houses have been finished and can be visited today.

The HOUSE of VIRGIN MARY

It is located on the top of the "Bulbul" mountain 9 km ahead of Ephesus, the shrine of Virgin Mary enjoys a marvelous atmosphere hidden in the green. It is the place where Mary may have spent her last days. Indeed, she may have come in the area together with Saint John, who spent several years in the area to spread Christianity. Mary preferred this remote place rather than living in crowded place. It is a typical Roman architectural example, entirely made of stones. In the 4th century AD, a church, combining her house and grave, has been built. The original two-stored house, which consisted of an anteroom (where today candles are proposed), bedroom and praying room (Christian church area) and a room with fireplace (chapel for Muslims). A front kitchen fell into ruins and has been restored in 1940's. Today, only the central part and a room on the right of the altar are open to visitors. From there one can understand that this building looks more like a church than a house. Another interesting place is the "Water of Mary", a source to be found at the exit of the church area and where a rather salt water, with curative properties, can be drunk by all.

The monumental basilica was in the shape of a cross and was covered with six domes. Its construction, being of stone and brick, is an extremely rare find amongst the architecture of its time. Raised by two steps and covered with marble, the tomb of St John was under the central dome, that was once carried by the four columns at the corners. The columns in the courtyard reveals the monograms of Emperor Justinian and his wife Theodora. Constructed in the 5th century AD, the baptistery is north of the nave, with its key hole shape. Rampart walls around the church were constructed for protection from the Arabian attracts in the 7th - 8th centuries AD. The impressive 10th century AD frescoes representing St John, Jesus and a Saint, ornament the chapel. With the invasion of Turks, the chapel was used as a mosque in the 14th century; unfortunately Basilica of Saint John became unusable due to the serious earthquake in the same century.

There are artifacts from Ephesus and around in other various museums in Vienna, London, Izmir and Istanbul. Before the exhibition halls in the entrance on the left, guests can watch the illuminating video of Ephesus with many animation images. Overhead projector video film is in 3 different languages: Turkish, English and German, each 10 minutes. It has two main sections: archaeological and ethnographical. Various artifacts from Prehistoric, Mycenaean, Archaic, Classical, Hellenistic, Roman, Byzantine, Seljuk and Ottoman Periods are on display in 8 different exhibition halls and in a large courtyard.