HISTORY is being Re-WRITTEN

Gaziantep Archaeological Museum where the spectacular mosaics saved from Zeugma Antique Site are exhibited. Tepebasi district to see the fine examples of mid-nineteenth century southeastern Anatolian architecture -the missionary hospital and school constructed at the request of Tepebasi’s merchants, Synagogues, mosques and Roman Catholic, Protestant and Orthodox churches. Exploring the historical part of the city as well as for shopping at the copper bazaar is also worth to visit.

Göbekli Tepe, an incredibly important site inhabited 12,000 years ago. The site contains the oldest known place of worship in the world, predating Stonehenge by 7,000 years. It consists of a number of concentric circles with great stone slabs carved with animals and plants. Before Göbekli Tepe was excavated, archaeologists could not even conceive that a site as old and extensive as this could ever have existed. It had always been assumed that agriculture and agricultural settlements came first, followed later by construction of temples and worship sites. Here, we have a religious site that predates the Agricultural Revolution, forcing a rethinking the nature of life in hunter-gatherer and pre-agrarian societies.

Harran, overlooking to the Atatürk Dam which is presumed to be the location where Rebecca drew water for Jacob and where Abraham decided to move into the land of Canaan. Explore Harran, lying on the Mesopotamian plain, known for its mud brick ‘’bee hive’’ like dwellings.

The‘’glorious’’ Urfa, which is a truly old city.  According to both Christian and Muslim sources, Abraham received his summons from God to take himself and his family to Canaan while living in Urfa.  The Cave of Abraham; (today’s pilgrimage and worshipping place),according to the local legend, it was here that Abraham was born, spending the first ten years of his life hiding, because a local Assyrian tyrant Nemrut, had the decreed that all new born children be killed. Halil – ür Rahman Complex; in accordance with traditions this is a holly place, housing a mosque and two pools filled with sacred carps which is the one that saved Abraham from a fiery end. 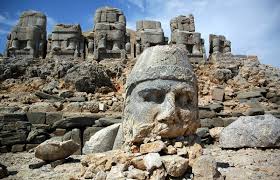 mountain in Northern Mesopotamia at 7,053 feet, sits the gigantic funerary   sanctuary erected in the first century BC by King Antiochus I of Commagene.   The engineering involved continues to amaze visitors seeing for the first time the artificial tumulus as terraces flank it on which rest the colossal statues of Apollo, Zeus, Hercules, Tyche and Antiochus.

Mardin is also known for its' historic houses which have been recently restored by UNESCO. From a distance, the golden stone of Mardin houses blend into the rock of the hills on which the city is built.

The Hightlights of Mardin: Midyad – Mardin one of the World’s first Universities, Mesudiye Medrasa & Mor Gabriel Church. Darülzafeyran, which used to be an Assyrian Orthodox Monastery where guests will discover the highlights of Assyrians Civilization. Besides, it is worth to visit the Great mosque, the bazaar, Sultan Isa and Kasimiye medreses, Kirklar church and the old post office.